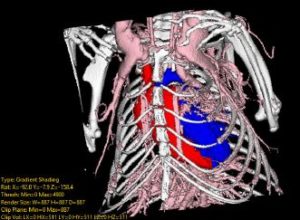 Segmentation is one of the most important functions of 3D image visualization and analysis. The goal of segmentation is to partition an image into regions, or objects, that are homogeneous with respect to one or more characteristics or features. Segmentation is a critically important tool for the processing of image data and is often the precursor to other applications such as measurement, visualization, surface-based registration and surface extraction.

Analyze uses a file called an object map to partition image data into groups of voxels within a segmentation component map. After creation of the object map through segmentation, it can be used to drive visualization, registration, surface generation and statistical analysis.

The object map is an associated volume with the same dimensions as the image data. Each voxel of the object map contains an 8-bit value which encodes it as belonging to 1 of 256 total possible objects. Every voxel in the data set is initially assigned to the first object (Original), leaving 255 additional objects that can be used for 2D region or 3D volume of interest definition.

The Segment module in Analyze contains more than two dozen automatic, semi-automatic and manual segmentation tools to provide all of the functionality required to effectively segment regions of interest in a 3D volume image. For details on all of these segmentation functions download the Segment chapter of the Analyze User’s Guide.