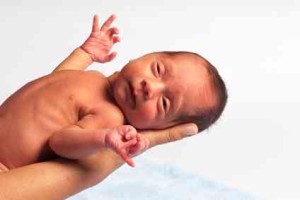 Intrauterine growth restriction (IUGR) refers to abnormal fetal growth, and often results from poor maternal nutrition or lack of adequate oxygen to the fetus. IUGR is found in up to 10% of all pregnancies, in 20% of stillborn births and is associated with high morbidity and mortality. Volume and neural network changes in cerebral white and gray matter are correlated with IUGR, as are cognitive and learning disabilities.

The fetal corpus callosum is specifically susceptible to IUGR, as it begins to develop early in gestation. It first grows longitudinally and then thickens and expands in later gestation, continuing to mature through adolescence. Early abnormal IUGR is shown to reduce corpus callosum growth rate, as well as decrease white matter volume in the cerebellum and produce infant developmental delays. Hypoxic damage causes changes in fiber development and myelination. As the corpus callosum is integral to communication between cerebral hemispheres, damage can have critical post-natal ramifications.

The corpus callosum is a well-defined structure, and is easily explored with ultrasound and imaging technologies, giving it inherent potential as a biomarker for in utero neurodevelopmental assessment. These attributes prompted researchers at the University of Barcelona to explore gestational corpus callosum development as a predictor of abnormal fetal neurodevelopment in late onset IUGR.

Gabriela Egana-Ugrinovic and her team examined 117 IUGR and 73 normal control fetuses for changes in the corpus callosum (MRI at 37 weeks), as well as post-natal neurobehavioral performance. IUGR was defined by fetal weight <10th percentile, with normal umbilical artery Doppler. MRI was performed at 37 weeks of gestational age without fetal sedation.

Division of the corpus callosum on the mid-sagittal slice into its sub-structures is critically important. Thus a standard approach using the measurement protocol developed by Witelson et. al. was employed. Slices chosen for measurement had to include landmarks: the cavum septi pellucidi, thalamus, midbrain, cerebellar vermis and cisterna magna; as well as exacting visualization of the corpus callosum substructures: the rostrum, genu, rostral body, anterior midbody, posterior midbody, isthmus and splenium.  These structures were defined and measured using Analyze software, designed to accommodate the Witelson protocol. Measurements included corpus callosum length, width and total area, as well as area measures of all substructures. All measurements were corrected for fetal size by expressing areas as a function of cephalic index.

The heterogeneous sample, use of well-defined landmarks, standard measurement protocol, and correction for fetal size, lend strength to the results of this study. On the downside, movement artifact rendered some images not useful, and behavioral assessments obtained at 43 weeks of age may not necessarily predict deficit at an older age, but commonly do so.

Nonetheless, the results of this study confirm corpus callosum changes previously reported with IUGR. Uniquely, a correlation between late-onset IUGR changes and corpus thickening, rather than lengthening was seen. This finding, in addition to demonstrably reduced neurobehavioral performance, suggests that neural reorganization of white matter may be associated with late-onset disruptions in embryonic growth.

Fetal corpus callosum changes appear to be consistent enough to serve as a valuable biomarker for pregnancies at high risk for abnormal fetal development, that can be a signal for a variety of congenital conditions. Such early detection is critical in providing maximum opportunity for targeted interventions.