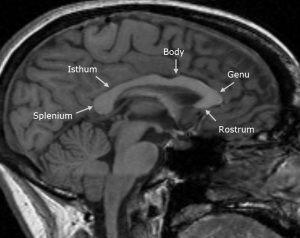 The largest fiber pathway in the human brain, the corpus callosum, serves as the brain’s central interconnecting structure, having over 200 million nerve fibers extending between the left and right hemispheres. Posterior to anterior, the corpus callosum is divided into five main sub-structures: splenium, isthum, body, genu and rostrum.

Historically, the function of the corpus callosum had been a mystery. As recently as the 1950’s there was a largely accepted hypothesis that the corpus callosum was only present to keep the two hemispheres of the brain from colliding with each other. However, it is now known that roles of the corpus callosum include communication between hemispheres, eye movement, levels of arousal and attention, and tactile localization. Additionally, malfunction, loss, or deformation of this structure is now associated with several brain diseases and mental health disorders.

Major depressive disorder – characterized by a widespread and constant low mood, loss of interest in normally enjoyable activities, and low self-esteem – is an example of such a disorder in which an association with the corpus callosum structure has been observed. Specifically, it is suggested that a developmental insult to the corpus callosum could contribute to the development of major depressive disorder.

Much of this research has focused on the structural size of the genu, which has been shown to be smaller in patients with early onset depression (Lyoo et al, 2002). For adult  patients with a family history of major depressive disorder, a thickening of the genu was observed (Lacerda, et al 2005), while in elderly patients suffering from major depressive disorder, a thinning of the genu was present compared to controls (Ballmaier et al 2008). While the literature with regard to genu size has not been conclusive, research in this field continues to grow.

A recent study by Kemp et al at the University of Calgary published in the Journal of Affective Disorders, examined the age of depression onset (adult vs pediatric) as it related to area of the genu in adults with major depressive disorder. 21 MDD patients with pediatric onset (< 18 years), 31 patients with adult onset ( > 19 years) and 19 healthy controls participated in the study. MRI scans were taken of all the patients, and the area of the corpus callosum and its individual sub-structures were measured using Analyze.

The study found a smaller genu area in major depressive disorder adults with a pediatric age of depression onset compared to controls. It is suggested that the decreased genu area in adults with MDD is mitigated by an early onset episode of major depressive disorder. The cause of this genu thinning could be shrinking of the myelinated axons found in the genu, demyelination or excessive pruning. While the study was limited by its sample size – future studies using larger sample sizes, and diffusion tensor imaging to measure axial diffusivity were recommended – the findings of Kemp et al provide additional evidence that genu abnormalities in the corpus callosum in early onset depression persist into adulthood.