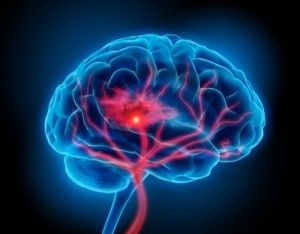 This syndrome occurs when a blood vessel within the brain ruptures, allowing blood to leak inside the brain, causing damage to the surrounding brain parenchyma. If the amount of blood increases rapidly, the sudden buildup in pressure can lead to unconsciousness or death.

Many physicians have been reluctant to treat hypertension in these patients because of the concern that overaggressive treatment of blood pressure may decrease cerebral perfusion pressure, the difference between the mean arterial pressure and the intracranial pressure. This change in pressure may theoretically worsen not only brain injury surrounding the acute hematoma, but also areas remote from the ischemic region.

Scientists from the University of Alberta, Canada, recently investigated this hypothesis, that is whether antihypertensive therapy may reduce cerebral perfusion pressure in perihematoma and borderzone regions.

Seventy-three patients were randomized to achieve blood pressure lower than 150 mm Hg or 180 mm Hg. At a later stage they underwent CT scan of the brain. Perfusion maps were then derived from these images and transferred to Analyze software to generate maps of cerebral perfusion pressure.

The use of noninvasive imaging techniques allowed the group to show that reduction of blood pressure did not alter cerebral perfusion pressure and did not compromise potentially vulnerable ischemic regions. These results suggest that blood pressure management may be considered a safe strategy for the treatment of intracerebral hemorrhage.

Download our Guide to Intracerebral Hematoma Volume Measurement from CT